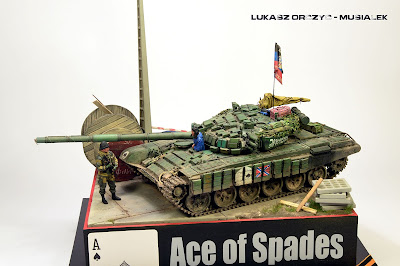 The story of T-72 was told thousand times and the plenty of books were written by the specialists.  Also hundreds of internet pages describe this vehicle. So, why is it so popular? Because of the technical ability,  firepower or maybe its combat history? I do not think so! In my opinion the answer is quite easy - because of its amount. Almost 20,000 units were produced so far. The T-72 was exported widely and saw service in 40 countries. Some improved variants are still being built for export customers.


The war in Donbass is still on. Truly speaking the diversity of tracked and wheeled vehicles used by both sides of this conflict is the perfect inspiration for all fans of Russian military models - cars, APCs, tanks, self-propelled artillery and many more are in the modelers range.
Here I would like to present the newest Trumpeter's kit 05599 prepared as the separatist tank signed as the Ace of Spade from Viking Battalion. 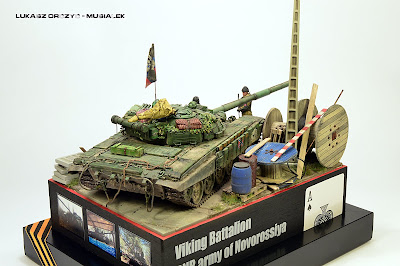 Because of the reasons I mentioned above I wanted to build this kit in typical green finish but with some interesting finish. After the searching in collection of battlefield pictures I found the serie of Ace shots taken by Gennadiy Dubovoy. They were good enough to decide to use them as the references. Fortunately Echelon prepared the decals set with stickers based on the same pictures I used to build the model so it was obvious that I will build this specific tank. 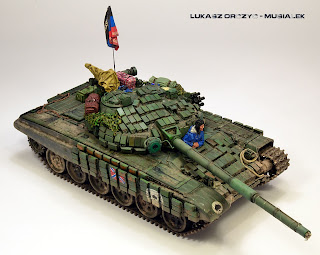 Kit
Truly speaking this was one of the best kits I ever build. And I am not writing it to make any kind of  advertisement for Trumpeter. This is the truth. Of course there are some small mistakes but they have no influence to the final appearance of the kit and for my opinion. I can say - "extremely recommended!"

Building stage
The good fitting and well detailed elements resulted with smooth building process. Even the preparation of Kontakt-1 bricks was easy and fast work. But the biggest surgery operation was the surroundings of the drivers visor - I needed cut it out and build it from the beginning because of totally different shape.

Let’s play with colors!
For the main colors I used the AK paints released as the Modern Russian Colors vol.1 and vol.2. They were applied on the black primer airbrushed earlier. The detail's finish was done with Vallejo Model Color and with LifeColor on the rubber rims. 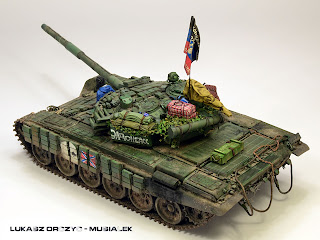 The Echelon Decals provides very good set of Novorossian T-72B1s markings (there are also 2S1s and a BMP-2) that were been seen in action against the Ukrainian forces in the eastern Ukraine. The set comes with two antenna flags.

Drops of chemicals and pinch of pigments
The main role in the weathering stages was played by Wilder chemicals. As I use them for couple of months I can say that they are a bit different than other brands but have evident advantages - it is needed to learn how them use properly to achieve nice results but truly speaking the learning process is very fast and simple.

Additional stuff
I treat the additional stuff on the models as my trademark so here I could not make an exception. To realize this I use Eureka XXL new resin sets of tarp and tents, Akrebuza's barracuda net and Paper Panzer Production stunning wooden box. In addition I put some dirty rags, rope, wires and Plus Model plastic bottle. 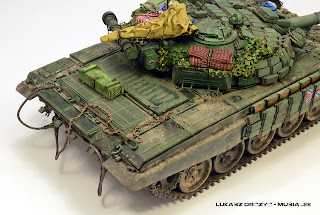 Diorama
To set the whole scene I use simple photo frame 20 x 26 cm and balsa wood. It was enriched with ace of spade card, St.George ribbon, small pictures of the real tank and the descriptions (stickers).
The ground work based on the Eureka XXL concrete road panels and scratch build cable reels. The highest point of the base, the telegraphic pole, comes from Macone resin set.
To finish the overall view I used the barrels, some wooden planks and cables and pipes.

Figures
Both figures were painted with acrylics. 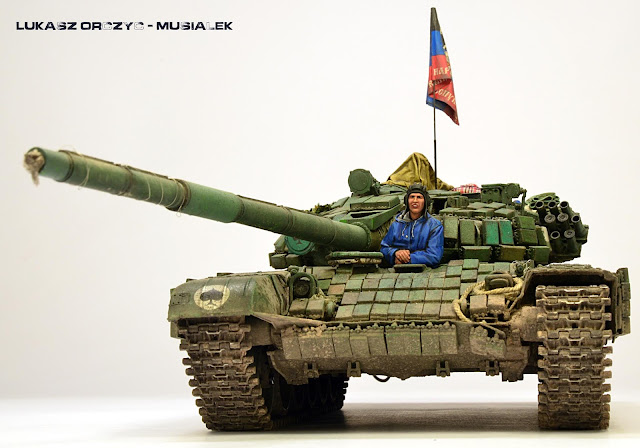 The end
I build this kit and its surrounding quite fast - 5 weeks of work give the result you can see here. I’m really satisfied with the result. This kit was nice to build and hope to meet another Trumpeter kit on my way!
I would like to thank Maciej Góralczyk , Piotr Wypiór and Ronin Ira from  Military Equipment Of Conflict in Ukraine Facebook group. 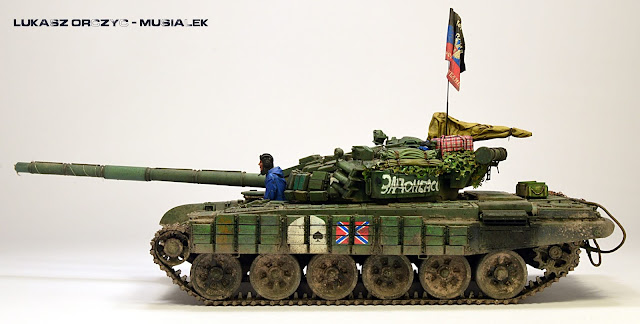