My latest kit I've finished yesterday. As the base Miniart's T-54B was used with additional of RB Model gun barrel and set of Friuls. There are also Eureka towing cables and a lot of resin stowage which was partly provided by Paracel Miniatures the same as figures. 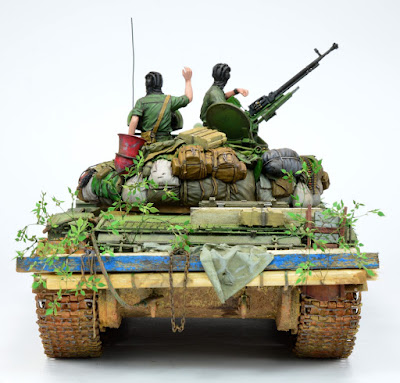 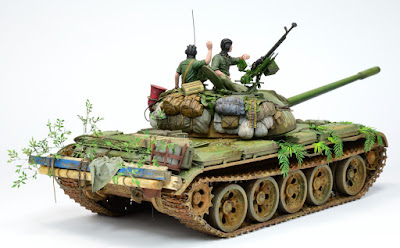 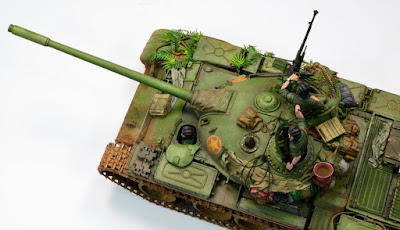 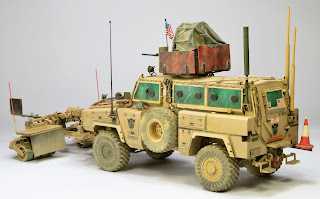 I was a bit disappointed after the box was open… I was reading a lot of reviews where the authors clap their hands a lot but probably they did not look carefully on the parts. I am not saying the kit is bad but here and there a level of the parts’ finishing is under current limits. Some of the parts need a lot of patience and work to look properly but in result it is possible to make a good-looking model. All in all, for this price the producers should be more accurate. 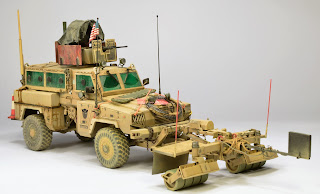 Despite of the quality of the RG-31’s parts this kit is a perfect addition to each modern MRAP’s collection. It is one of the smallest vehicle in this family but it is typical “must have” kit. With no doubt it is an unique subject moreover no other RG-31 is available as an plastic kit. Hopefully there will be more interesting color schemes and markings because of its growing usage.
The set comprises approximately 203 parts in sand color plastic, clear parts, 20 black vinyl parts and a photo-etched fret. Markings are provided for three vehicles. 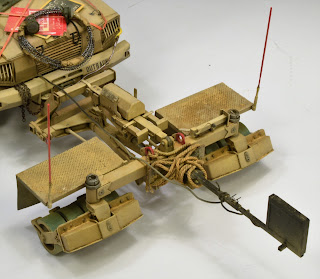 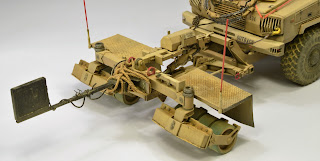 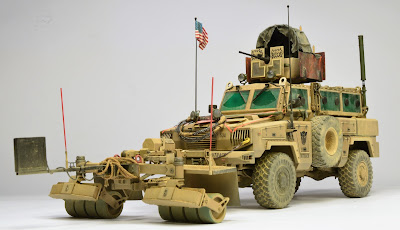 I used the set from the box connected with Echelon D356166 “RG-31s in Afghanistan”. They allow to prepared the vehicles with Transformers names. Because I like to change the decals a little, they were modified – I replaced the letters in the vehicle’s name from “Blackout” to “Outback”. 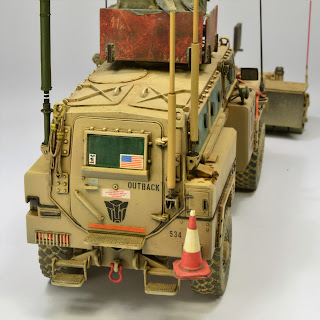 The Entwicklung series, more commonly known as the E-series, was a late-World War II attempt by Germany to produce a standardized series of tank designs. There were to be standard designs in six different weight classes, from which several specialized variants were to be developed. This intended to reverse the trend of extremely complex tank designs that had resulted in poor production rates and mechanical unreliability. 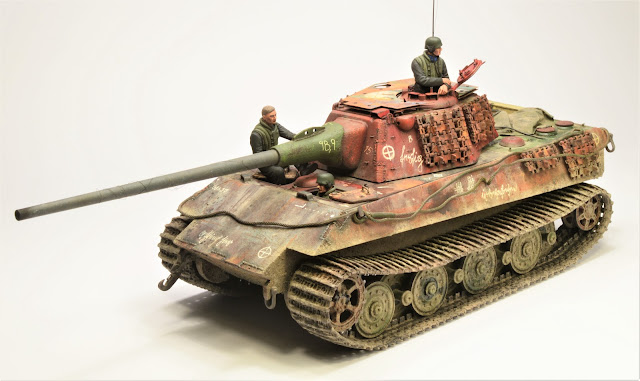 The E-series designs were simpler, cheaper to produce and more efficient than their predecessors; however, their design offered only modest improvements in armour and firepower over the designs they were intended to replace, such as the Jagdpanzer 38(t), Panther Ausf.G or Tiger II; and would have represented the final standardization of German armored vehicle design. Indeed, nearly all of the E-series vehicles — up through and including the E-75 — were intended to use what were essentially the Tiger II's eighty centimeter diameter, steel-rimmed road wheels for their suspension, meant to overlap each other (as on the later production Tiger I-E and Panther designs that also used them). 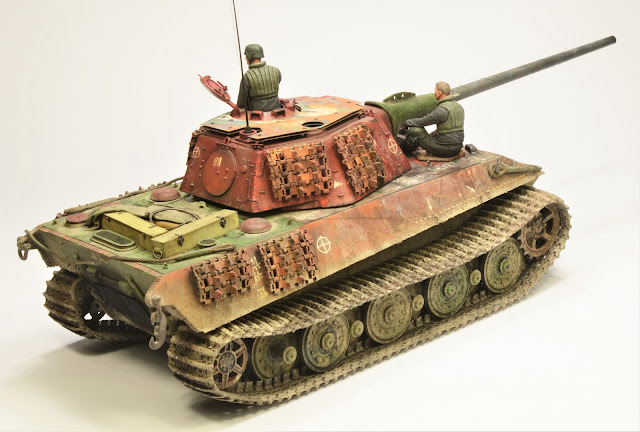 The E-75 Standardpanzer was intended to be the standard heavy tank to be used as a replacement of the Tiger II and Jagdtiger. The E-75 would have been built on the same production lines as the E-50 for ease of manufacture, and the two vehicles were to share many components, including the same Maybach HL 234 engine. As its name indicates, the resulting vehicle would have weighed in at over 75 tonnes, reducing its speed to around 40 km/h. To offset the increased weight, the bogies were spaced differently from on the E-50, with an extra pair added on each side, giving the E-75 a slightly improved track to ground contact length.

According to some sources, the similarities between the E-50 and the E-75 went further; they were to be equipped with the same turret and 8.8 cm KwK 43 L/71 along with an optical rangefinder for increased long range accuracy. German scientists and engineers had successfully designed a Schmalturm, narrow-front turret and infra-red lighting and sights for use on the prototypes of the Panther Ausf. F as the war drew to a close.
The original complex suspension by torsion bars was simplified with bogies. The standard Tiger II turret was equipped with 8.8cm KwK 44 L71 gun. The engine was an improved, fuel-injected Maybach HL234 which had 900 hp.

My aim was to create something different than next red primed "E" kit which is the most popular painting in the kits from this series. I was looking for inspiration in the internet and components of the project. I did not want to copy Adam Wilder's E-50 painting (one of the best I have ever seen) or even Geschuzwagen Tiger but the best solution for my kit seems to be dual colors painting - steel plates with rust traces connected with red primed turret. The vehicle would be out of the production line, without the tools only with towing cables and some spare track links as the additional armor on the turret and back of the main body.

I used Paper Panzer Production resin sets and figures prepared to this kit the same as Wilder's dry decals and chemicals. 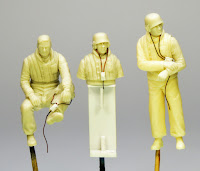 Full S-B-S article with the pictures was published in Military Modelcraft International. 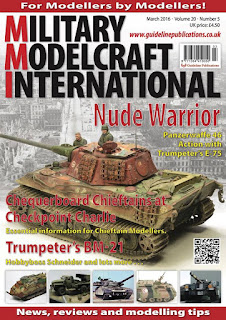 
No description. Just to show the kit. 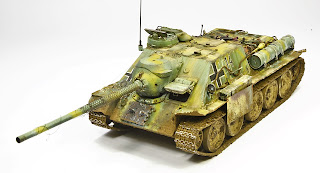 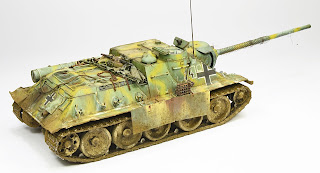 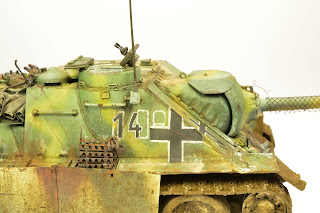 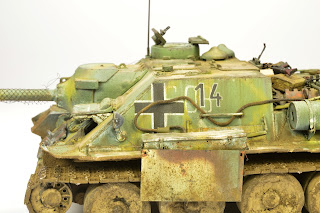 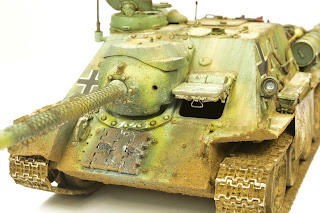 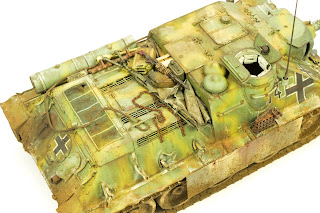 
Here is the list of all elements and sets I used to complete this kit. As you can see there is a lot of small elements I used – I love such additions on the kits because they bring more life to the model. Here are they:

Full article can be found here 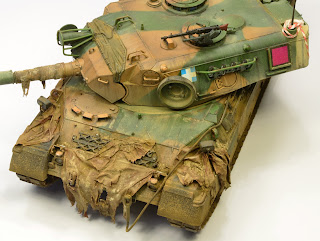 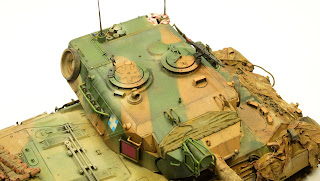 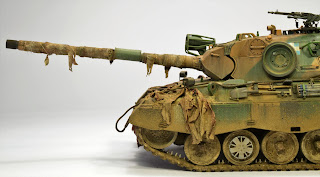 OK! Here you have another kit published in Abrams Squad book - Modelling the Abrams vol.1. There is full article with s-b-s pictures and the gallery.
You can spend the money and buy the book here :)

And some shots of my Abrams :) Enjoy! 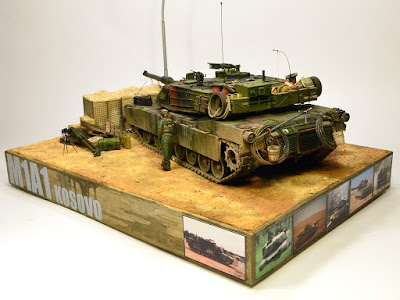 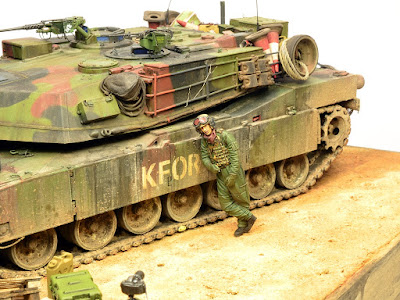 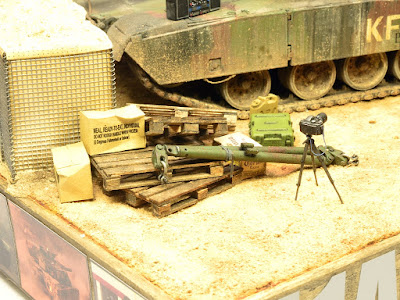 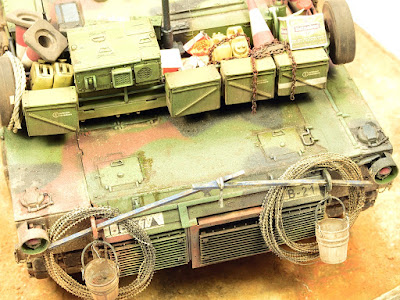 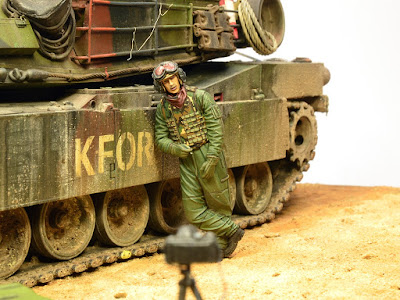