Technical
The ZTZ-99A was developed in design offices as the third generation battle tank designed for Chinese People's Liberation Army and it is the further development of 99's family. According to experts the ZTZ-99A is in a leading position in the world in terms of firepower, defense, maneuverability, and information technology.
To speed 54 tones to 80 km/h on the roads and to 40 km/h cross-country it needs 1500 hp water-cooled engine. The three members of the crew operate this steel beast - commander and gunner sit in the turret when the driver in the front and centre of the hull. They use 125mm stabilized cannon as the main armament which is loaded with autoloader and can detect, identify and locate the target at up to 5 km. The standard anti-aircraft 12,7mm gun is located on the turret. It has also 7,62mm coaxial machine gun.
It has the hull which is similar to T-72. The front the same as the turret is covered with additional modular armour plating which can be replaced shortly in case of damage. The crew is equipped with NBC solutions the same as anti-incendiary system. The vehicle has smoke grenade launching system as well as laser facilities necessary on the modern battlefield. 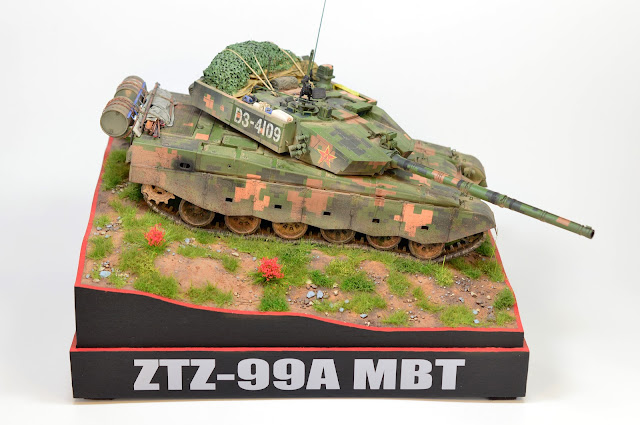 Kit
I was impressed after the box was opened because in comparison to the previous kits from this producer, this one is the best. The sandy colored plastic sprues consist detailed suspension, track links, nicely detailed hull with stowage boxes, photo-etched grilles on the engine deck and rear exhaust, rear-mounted fuel containers, armor blocks on hull glacis plate, detailed turret with armor blocks and main gun with thermal sleeve. There is also clear sprue with lights and glasses for electronic devices.
Just a notice about the three-piece track links - first I thought they will be a nightmare but it should be said that the designers made their job perfectly. With the special tool provided with the kit we can build them really fast and the fitting is extremely good. The only thing I would like to have is a choice to have steel set and the one with rubber pads. As I noticed in the pictures the steel tracks are used in the field mainly but there are exceptions and the rubber boots are seen there too.
The decals sheet provide stars and numbers for the parade unit. You can use them for no risk if you build this version of the kit but If you would like to create the tank in the maneuvers it will be better to find bigger stars and some letters.
The only camouflage which is correct for this tank is shown on the color plate added to the kit - so you need to pixelize of you kit. 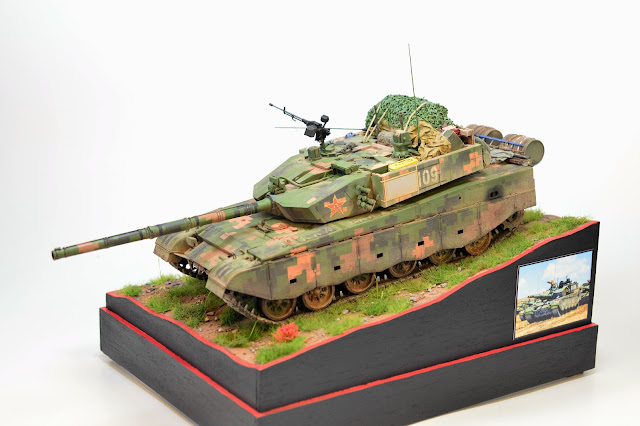 When the kit arrived I was wondering what to do with it and how to show it in interesting way. I was sure that "parade option" is not for me and it needed something more realistic and dusted than polished and shiny toys. So my idea was to put it on light slope and simulate the working chassis. I needed to remember about this during the building stage. This is why the kit does not leveled and the tracks look quite strange without the terrain. 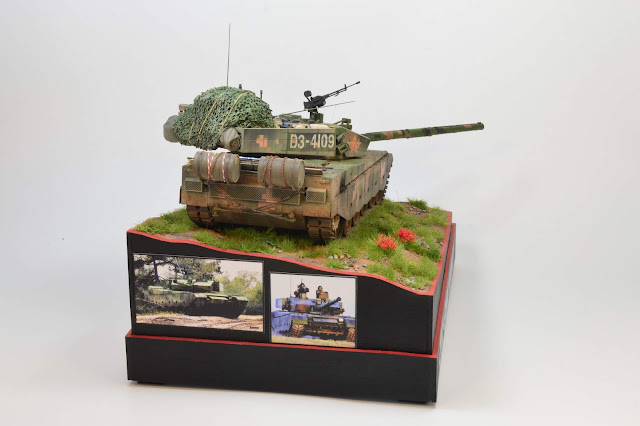 Final thoughts
I thought that it will be stressful and hard work. But it became quite differently. I can say that this kit can be highly recommended and should be a great addition to each modern tank collection.

I would like to thank to Xiang Zhu, Jacques Duquette and Lester Plaskitt for help and comments during this build.

You can find full article with s-b-s- pictures in Military Modelcraft International. 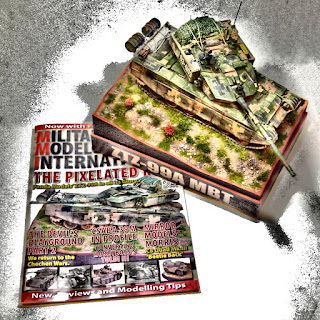 This is the tradition to start the article with some history and technical information so I do n ot want to breake the rule and here they are.
The FV4034 Challenger 2 is a British main battle tank (MBT) designed and built by the British company Vickers Defence Systems. It is in service with the armies of the United Kingdom (since 1998 and it is expected to be in service until 2035) and Oman.
The Challenger 2 is equipped with a 120-millimetre 55-calibre long L30A1 tank gun, the successor to the L11 gun used on the Chieftain and Challenger 1. Unique among NATO main battle tank armament, the L30A1 is rifled, because the British Army continues to place a premium on the use of High-explosive squash head (HESH) rounds in addition to armour-piercing fin-stabilised discarding-sabot rounds. The Challenger 2 is also armed with a 7.62 mm chain gun and a 7.62 mm machine gun. Fifty eight main armament rounds and 4,200 rounds of 7.62 mm ammunition are carried.

Kit
As I remember I always like the look of Challenger 2, espesially in desert version with the long rubber curains on the sides. The make the vehicle so massive and impressive so I decided to build this one someday. Fortunately friend of mine wanted to sell his kit for very good price. It was almost ready and needs only some small portion of work. I bought it and started to finish as soon as it arrived my home.
Truly speaking the kit is huge. I know it is big but in reality it was bigger than I expected. Awesome!
The kit is the standard quality  of Tamiya. This is the words which explains everything for each modeller who though once build their kit. The sand coloured plastic along with clear parts are enough to make you smile after the box is open. The vinyl tracks are also good. To complete the list I need to mention about the poly caps, some nylon cord, coper wire, plastic card, a pair of nuts and bolts for idler arms and a sheet of decals with options for 3 vehicles seen during Telic operation.

Idea
So, now what I wanted to achieve was the dusted vehicle with some additional stuff but not to much because it was really hard to attach the crew’s stuff on the flat surfaces of the tank. Before I started to paint the kit I collected some basic stuff I wish to compose on the model. To add some markings I have the sheet from the kit and some additional decals from Bison Models which were also helpful because I decided to mix them and breake the one shade of the vehicle with colorful additions. I also wanted to present the kit on some simple base -  just black plastic top and wooden (balsa) frame with the pictures and some name. I added the Union Jack sticker too.

Components of the project
Despite the kit is very good I decide and have the possibility to make so changes. First I replace the vinyl tracks for the separate links from Bronco (AB 3523). Next I used couple parts from Voyager’s PE set (one of their first – the quality was far away from current products they offer), some Eureka XXL metal ropes (the endings were taken from the kit) and resin tarpaulins. The rest of the elements were scratch build – I based on the references pictures I managed to find in the internet.

Final thoughts
Well, one of my favourite tanks were added to the „done kits” list. It was pleasure to build it and finish in dust. It is a really good part of the collection because of its size and final layout. I hope that it was not my last modern British vehicle! 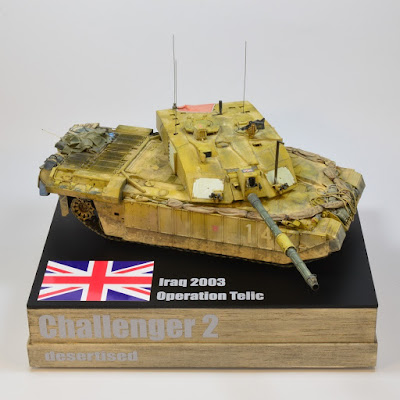