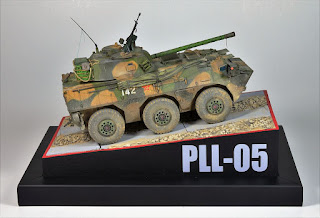 After I opened the box I was quite surprised that the model is so big but it was very easy and fast-forwarded because of its simple construction. Unfortunately no PE parts are available however I used the Voyager's set designed for the PTL-02 where some parts are the same. Looking at the upgrades I must mentioned about the Eureka XXL copper towing wire and Arms Corps Models resin antenna mount with RB Model metal rod. The smoke grenades were detailed with small chains In the end I enriched the kit with some camouflage net, rope, plastic military box and resin accessories on the turret's basket. Next the gun barrel was wrapped with metal mesh and around the main body I fastened the wire. Using the references pictures I noticed that it is common that those vehicles carry the tarpaulin on its side so I did the same on my kit.

Some technical information about the PLL-05 itself. The first trace of the PLL is dated on 2001 when the system was revealed. It entered the service after couple years and as the rest of the examples of military vehicles took part in the 60th anniversary of the People's Republic of China celebrations in 11th line. 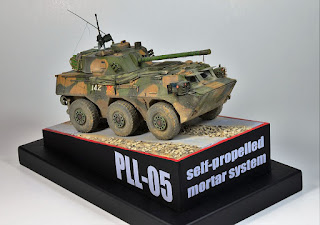 As the self-propelled gun-mortar is used by mechanized infantry formations. In comparison to the traditional gun-howitzer this one is lighter, more compact, has higher rate of fire and capability of direct fire.The 120mm gun-mortar in a 360° traverse turret  is the main armament of the PLL-05. It is fitted with semi-automatic loader with maximum rate of fire being around 8-10 rounds per minute. The vehicle carried 36 rounds (indirect fire mortar bombs and direct fire anti-tank rounds) with 9km of standard range. The secondary armament is a QJC-88 12.7×108mm heavy machine gun (Chinese Dshk version) mounted on the turret roof. The crew consists of the commander, gunner, loader and driver. 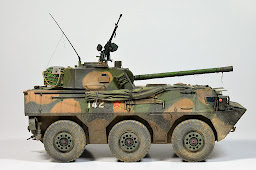 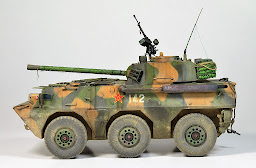 You can see the full article in Chinese Power book. 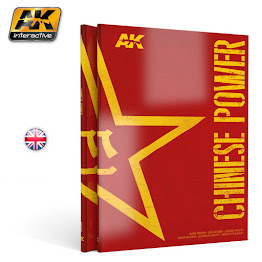