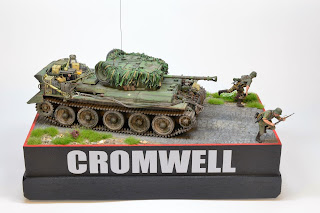 The Polish 1st Armored Division was the most famous Polish unit in all Second World War history. It was created in February 1942 at Duns in Scotland under Major General Stanisław Maczek command. The division started its battle route in the Normandy and finished in Wilhelmshaven. Mainly they were fighting as part of the First Canadian Army. Until 1947 they were located in north-west Germany and in June the division was disformed.

In last months I focused on modern subject but after some gaming in World of Tanks where I have Cromwell in my garage, I turned my eyes for this vehicle in 1/35 scale. It was obvious for me that the model must represent some Polish vehicle but I needed the unique idea to execute. I decided to create very dynamic scene with speeding tank and some German troops escaping from the road. 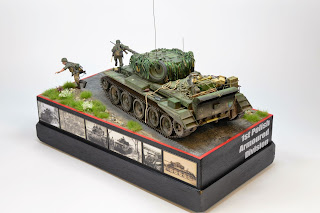 I can say that this small vignette is my tribute to those Polish soldiers who fought those days. After the battle of the Falaise Pocket Canadians commented: "Bloody Poles, what a job!" These words of appreciation were the most important reason for me to build this Polish Black Devil's Cromwell.

The history of Cromwell is well know so here I will focus on the building stage mostly.
There is no other possibility than just buy Tamiya's kit. So I did. To enriched it I completed some aftermarket parts:
- Friulmodel tracks
- Eureka XXL towing cables
- PanzerArt spare wheels
- RB Model gun barrels and antenna mounts 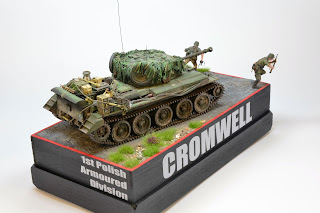 Some scratch build parts needed to be added if we want to bring the kit to the higher level. They were mostly from my old PE sets, furthermore some wires were used to replace the plastic handles but I also added dozens of plastic bolts on the kit and to the tacks. It was quite frustrating and time-consuming but with RP Toolz Punch and Die set the work was much easier than it could be expected.
Next, starting the painting I took my Tamiya's paints and using the instruction from the kit I prepare the mix in proportion given by the producer. As always in my models the base color was highlighted by adding couple drops of yellow to the base shade. Small elements were enlightened also but for this purpose I used fine brush.
The markings were done with stencils and with some standard decals given in the box. In addition I had some special stickers for Polish version of Cromwell (thank you Tomasz!).
The weathering stage was done quickly with chemicals provided by Wilder. The washes and filters created a lot of diversity in all panels of the kit but I decided to build more colors with oil paints. Using them I also prepared some dirt and filth stains.
The chipping work was done with standard technique basing on the sponge and 3/0 brush.
The final pigmentation I did also with Wilder's products with final touches of 502 Abteilung oil paints. 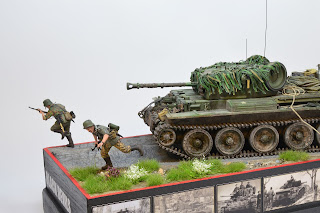 The stowage set were collected from wide range of different products. They are mainly resin with some cardboxes, ropes and chain.
In the end I prepared the Hessian net with a piece of bandage, sheet of yellow note paper and super glue. It was long work but the result is really good. It was easy to bring proper shape and create wind in those hair!

The base was build with balsa wood with styrofoam inside. The road stones were cut from cork and glued with white glue. In the corners I added some soil with grass.
The escaping Germans come from MasterBox set (German Signals Personnel) but I changed the heads for resin ones the same as some elements of equipment which come from Dragon range. The ranks were Archer's dry decals. 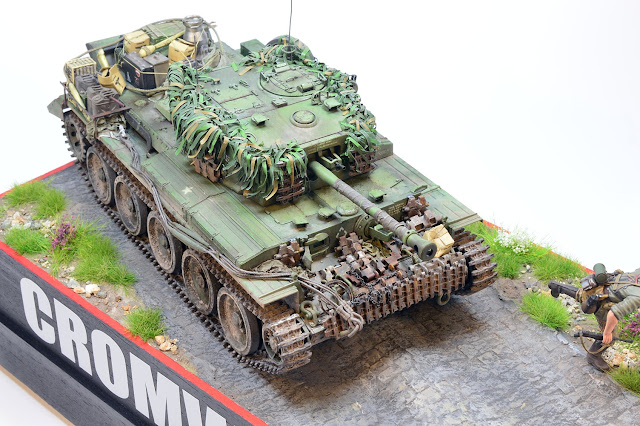