Why I have built this kit? Well, the reason was quite simple – I received it from my friend! Hahaha, seriously! But after it had arrived, I launched the Internet to find some interesting bases as a painting guide. Of course “SU” is not so popular as “ISU” so I found that it is a problem. The main point was not to build next green frog with communistic slogans but create something interesting drawing from ISU subject.
So, there were two possibilities for me – green with winter white wash or 4-tonned camo which is well known from Adam’s Wilder work he did with his ISU and there are pictures from the war period that shows those beasts painting in that manner. I found two shots where they are clearly visible.
Not sophisticated enough… I mixed both ideas. Unique camo with worn white camo. Tasty!
From the beginning I knew that I need to focus on the white areas of the tank to create the different volume on each segments. I planned to use standard hairspray technique and oil paints to make it. Moreover the colorful camo base intended to be not completely, which means I would like to cover only the sides and front of crew compartment and the gun barrel. On the top only small parts of color block could appear.
The second idea was to make some damages. Lets imagine that the tank took some shots on its right front side – there are traces of those hits and the most visible is lack of two road wheels. It is a bit controversial but I like when my kits provocate to discussion. The most important is the balance – the kit is tilted to the left side!
The third idea was to bring the realism to the kit. I found nice picture of “ISU” where it is shown from the rear left and several empty shells are lying on the engine deck. It was very inspirational so I decided to use it on my kit.
The forth was to use metal tracks from Friulmodel to prepare natural sack of them. There are hundreds of war pictures where soviets heavy tanks have tracks longer that they need. I like this effects so why not to use it?

SU -152 was a Soviet self-propelled heavy howitzer used by Red Army during World War II. As a base KV-1S heavy tank chassis was used and it carried gun-howitzer. SU was a predecessor of the famous ISU-152. The vehicles assigned to heavy artillery regiments – in the beginning they consisted of 12 tanks and later their number raised to 21. They started the service in February of 1943. For the first time they were used during the Kursk Battle where they fought with Panthers, Tigers and Ferdinands. Because of their role and capability of knocking out the Germans tanks, they were called Zveroboy which means “animal killer”.  The Soviet propaganda used this name very quickly. In the following months they were replaced by ISU-152.
Today we can find only 3 (from 700 vehicles produced) – 2 of them are in and 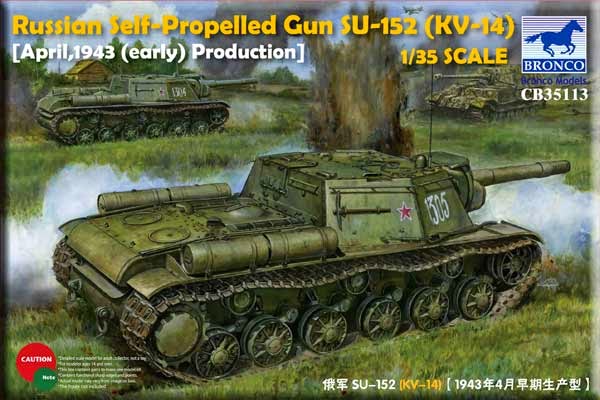 I built this model from Bronco set. It consists of typical Bronco’s plastic trees with parts (the detailed fighting compartment included) PE parts, clear parts for periscopes, individual track links (they can be movable), decals and the instruction.
I had the possibility to change some of the parts for aftermarket products, so here they are:
- Friulmodel tracks ATL-10
- RB Model gun barrel 35B63, shells 35P16 and DSHK 35B122
- Eureka XXL towing cables ER-3542, ER-3502
- Miniart ammo 35076
- Plus Model Loudspeakers 223
- Aber side fuel tanks  35A46 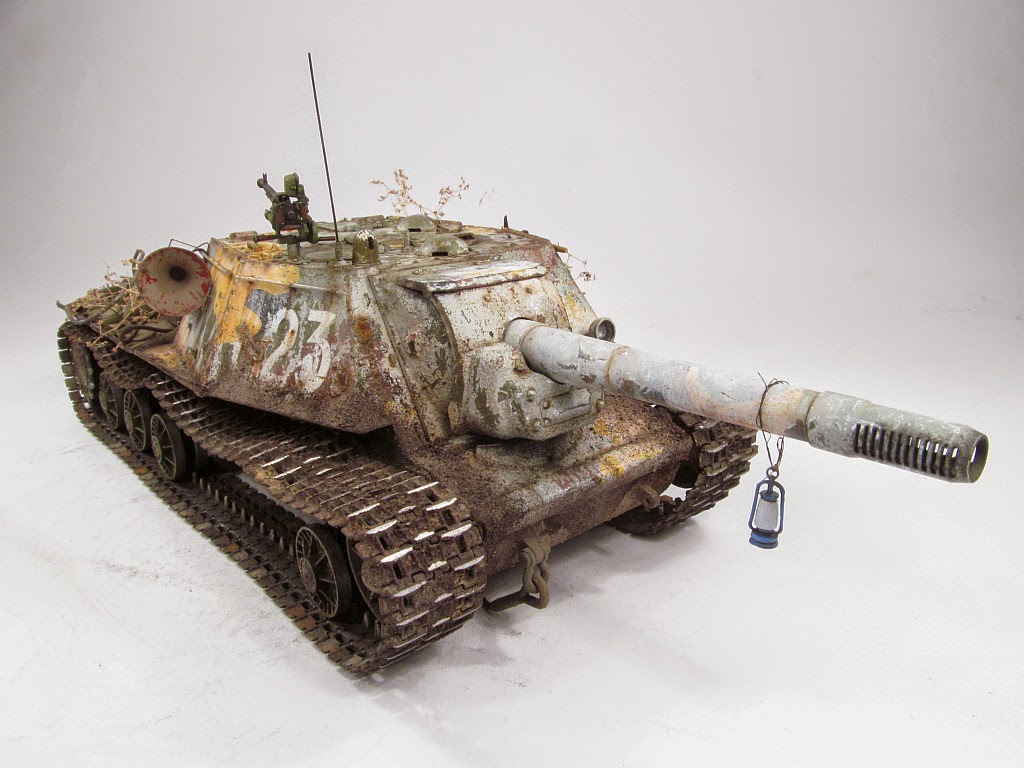 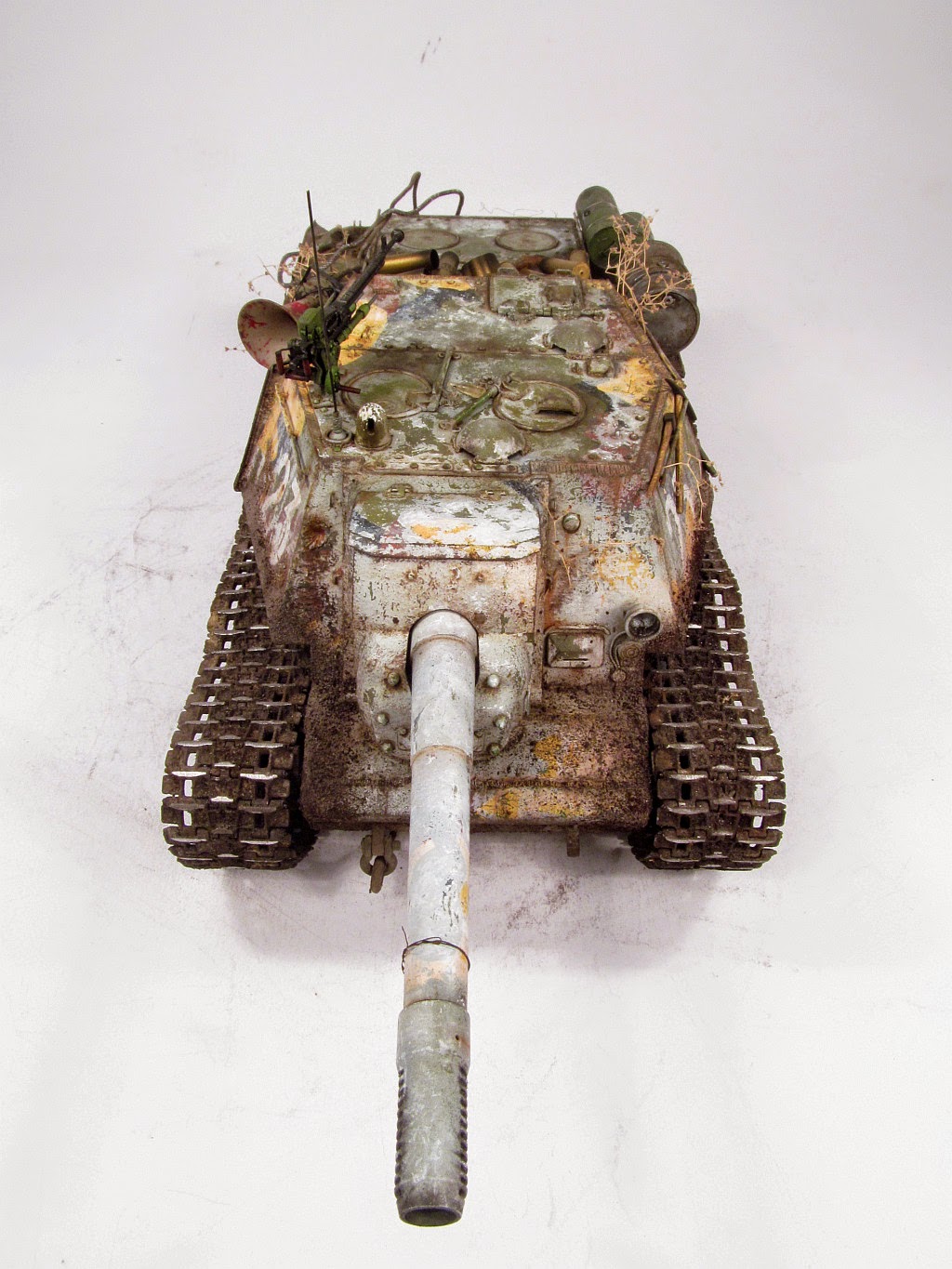 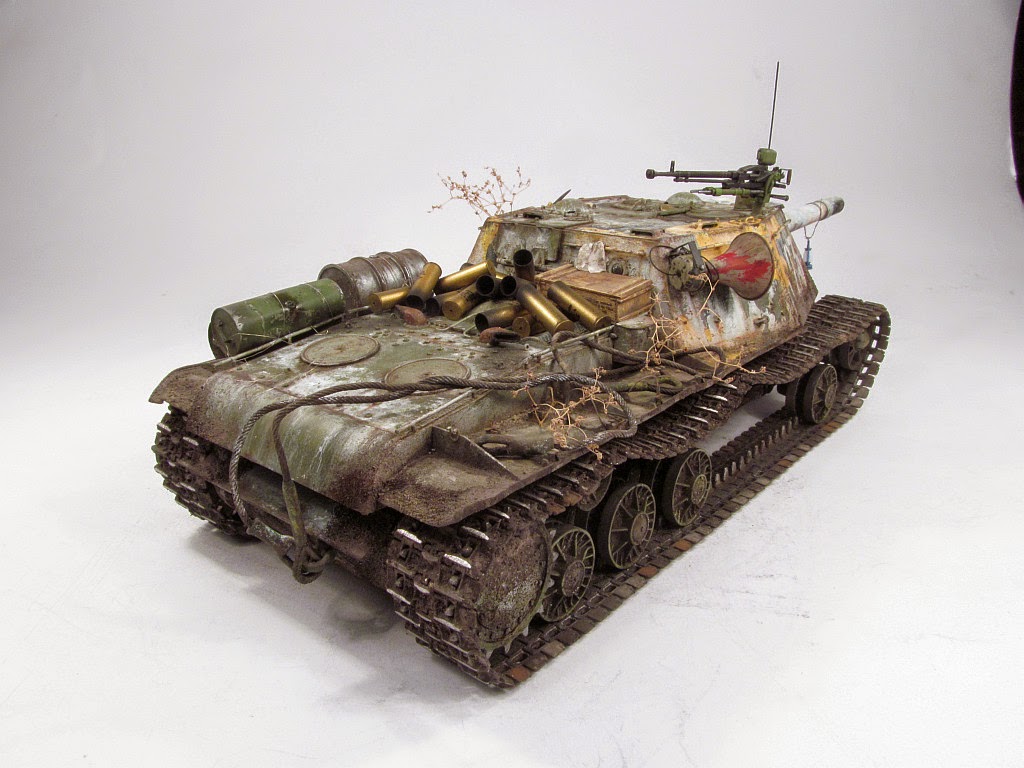 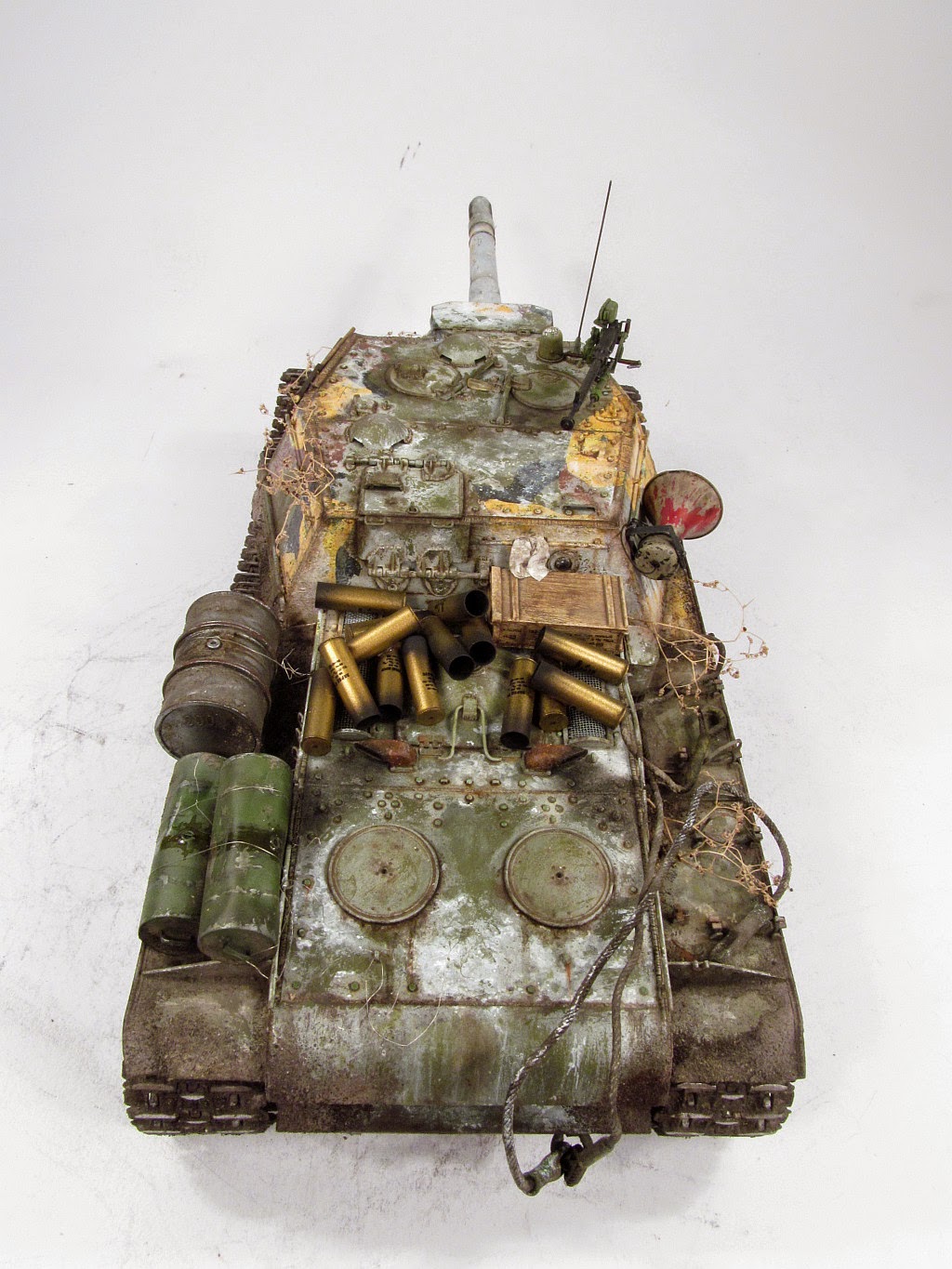 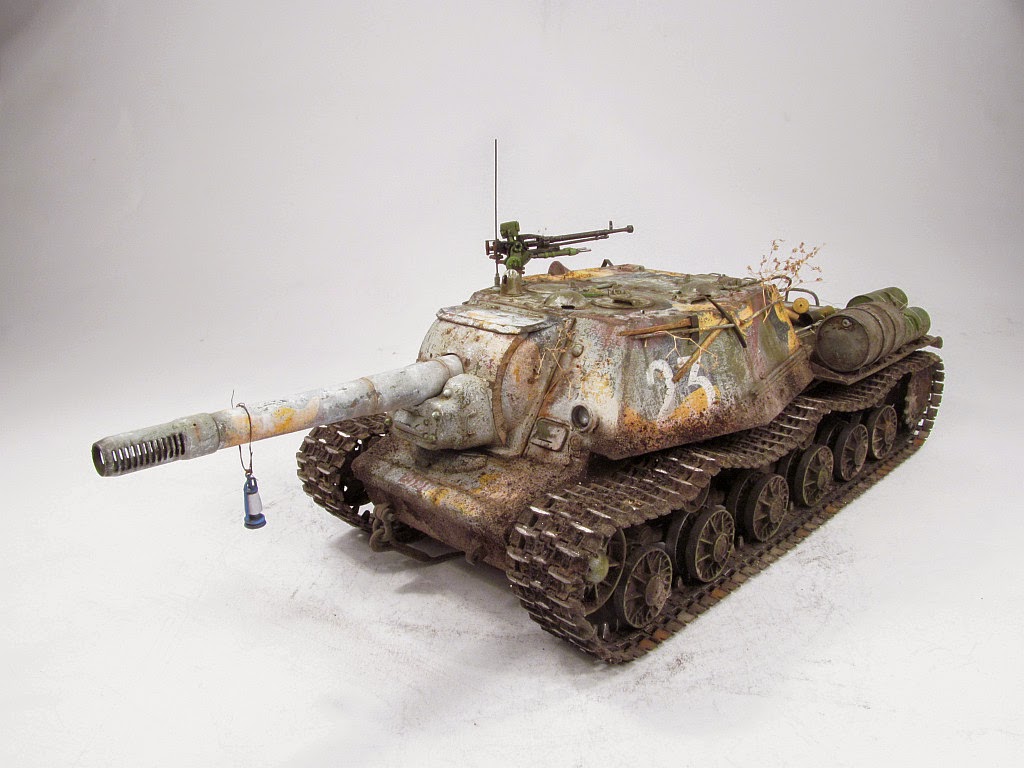 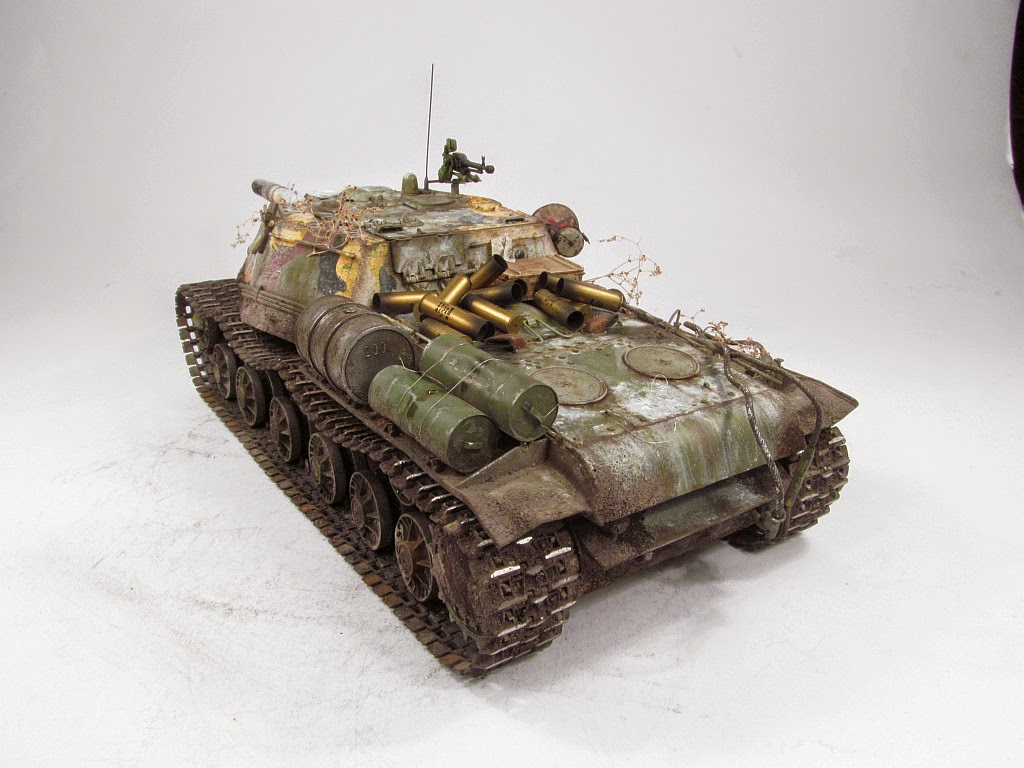 The kit was published in Military Modelcraft International (September 2014) and Hobbyworld (164).