It is the most important public holiday in Poland celebrated every year on 11 November to commemorate the anniversary of Poland's assumption of independent statehood in 1918 after 123 years of partition by Russia, Prussia and Austria. 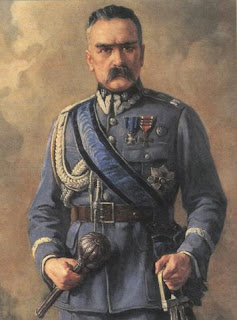 Józef Klemens Piłsudski, (5 December 1867 – 12 May 1935) was a Polish statesman—Chief of State (1918–22), "First Marshal" (from 1920), and authoritarian leader (1926–35) of the Second Polish Republic. From mid-World War I he had a major influence in Poland's politics, and was an important figure on the European political scene. He is considered largely responsible for Poland's regaining its independence in 1918, after 123 years of partitions.
Autor: Lukas o 13:52